In February 2022 Charlton Kings Parish Council wrote to Gloucestershire Highways requesting that the temporary speed limit on the A40 should be made permanent and extended between the 30 mph limit at Charlton Kings Gateway, by the Charlton Kings Hotel, and as far as Lineover Woods car park. This action was taken following local residents' concerns about road safety issues on the A40 and the fact that the Parish Council identified that this section of the road is changing in character with a significant increase in the volume of traffic slowing or turning right in front of oncoming vehicles and with more people choosing to walk and cycle along this stretch of the A40. The very positive response to our public consultation combined with the support of all our local authority councillors and our MP showed that there was a local desire for this permanent speed limit.

It is very disappointing that the Parish Council has to report that despite our best efforts we have not been successful with this application. This is the response that we received from the GCC Traffic Regulation Order Manager

"As for the request for a permanent speed limit reduction, GCC use speed data, collision data, Police opinion and Setting Local Speed Limit guidance in making their decision. The Police will not support any speed limit reductions where regular enforcement will be required for the speed limit to have effect. This means that the environment of the road needs to be suitable for a certain speed limit and comply with the guidance. Speed data was gathered in March 2022, whilst the temporary 40mph speed limit was still in place, and the mean speeds (read along with the 85th %ile speeds) were still too high to warrant consideration of a reduction to 40mph. It can be assumed that once the TTRO is removed, speeds will rise again and be compatible with a 60mph speed limit. Alongside this, the collision data for this location does not show that a speed limit reduction is required."

Members of the public are reminded that if they have any concerns about highway issues they should contact Gloucestershire Highways direct at "highways@gloucestershire.gov.uk"

We recently asked residents to take a few minutes to complete a short survey regarding a proposal for a permanent 40 mph speed restriction from Charlton Kings Hotel to Dowdeswell reservoir.

We are keen to represent the views of the local community and are pleased to report that we have received 390 responses to the survey.

85% were in favour and 15% were not in favour of reducing the speed limit to 40mph between Charlton Kings Hotel and Dowdeswell Reservoir.

The survey is one part of an evidence gathering process as public support is one of the criteria for obtaining a TRO. This is not a short process and nor is it guaranteed that a TRO will be granted however we are very grateful to everyone who took the time to complete the survey.

We have noted both the numerical data and the comments received and are sympathetic to the desire to improve the experience of those living and travelling along the A40 and particularly for walkers, cyclists, and horse riders. However, we must remind residents that we are not the decision maker in this process.

We will provide a further update when more information becomes available after meetings with Gloucestershire Highways and the Traffic Regulation Order (TRO) team.

We are asking local residents to take a few minutes to complete a short survey regarding a proposal for a permanent 40 mph speed restriction from Charlton Kings Hotel to Dowdeswell reservoir.

We are keen to represent the views of the local community and the results of this survey will feed into further talks with Gloucestershire Highways and our County and Borough Councillors.

The residents and businesses who live and operate along this stretch of the A40 have been sent the letter outlined below and we are relying on our website, social media, posters and our monthly newsletter to spread the word more widely to the rest of the community. We would be very grateful if you could spread the word using your personal network and complete the online survey here.

Please note: the option to select multiple forms of travel is not working on the online version of the survey and as of 23/02/22 we have had 147 respondents therefore we do not want to change the survey at this late stage. If you are keen to add extra information, please use the additional information box at the bottom of the online survey. Many thanks.

We are writing to seek your views on a proposal for a permanent 40 mph speed restriction on the A40 east of Charlton Kings between Charlton Kings Hotel and Dowdeswell reservoir.

We would be grateful if everyone who wishes to express a view would complete the survey at the end of this letter. If you need additional forms for family members, they can be downloaded from our website or the link to the online survey can be used as many times as is required.

Currently, there is a temporary 40 mph speed restriction on the A40 between Coxhorne Farm and the Lineover Wood car park entrance. The Traffic Regulation Order (TRO) enabling this was put in place in July 2018, renewed in December 2019 and will remain in place until it is revoked. All costs associated with the TRO were paid for by the Dunkertons Cider Company to enable the development of the estate into a significant retail and entertainment venue.

This TRO does not cover the A40 between Coxhorne Farm and the Charlton Kings Hotel which remains at the national speed limit of 60 mph (see diagram). 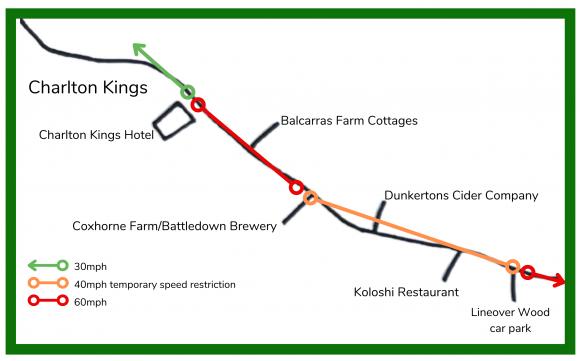 In recent years, the section of the A40 between Charlton Kings Hotel and the Lineover Wood car park has changed from being a rural single carriageway into an extension of the built-up area of Charlton Kings. As more businesses have developed and expanded, there has been a significant increase in the volume of traffic, with more vehicles slowing or turning right in front of oncoming vehicles. At the same time, more people are choosing to walk and cycle along this stretch of the A40.

Prompted by concerns from residents, the Parish Council wrote to Gloucestershire Highways in February 2020 requesting that the temporary speed limit should be made permanent and extended to meet the 30 mph limit at Charlton Kings Gateway, by the Charlton Kings Hotel.

After meetings with Gloucestershire Highways, local councillors (County, Borough and Parish) with the support of Cheltenham's MP are now proposing a new, permanent, 40 mph zone from Dowdeswell reservoir to the 30 mph limit at Charlton Kings Gateway, by the Charlton Kings Hotel.

The purpose of extending the 40 mph zone from Dowdeswell reservoir to Charlton Kings Hotel is to improve road safety for cyclists and pedestrians along this stretch, as well as for vehicles slowing and turning across traffic.

We are aware that such a change would require improvements in road layout, road markings, and signage. We would also be requesting that the police provide support to ensure that drivers observe the speed limit and the rules of the Highway Code.

Are you in favour of a permanent 40 mph speed restriction from Charlton Kings Hotel to Dowdeswell reservoir? 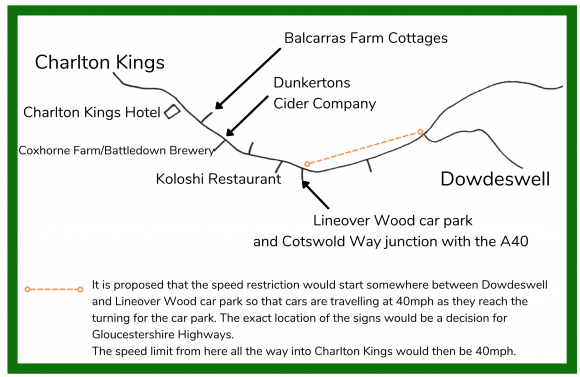 A new Traffic Regulation Order (TRO) to create a permanent 40 mph zone can take one to two years to make. It would depend on the level of public support or opposition, the associated legal and highways works, and the workload of the County Council's TRO team.

Whatever your views, in favour or against, we would like to hear from you, so that they can be taken into account. Please complete the short survey on the next page to help us represent our community effectively.

You can help us to reach more people locally by following Charlton Kings Parish Council on Facebook and sharing our social media posts which will also have the link to the survey. Please encourage local friends and neighbours to complete the short survey too. The survey will close on Monday 14th March 2022. 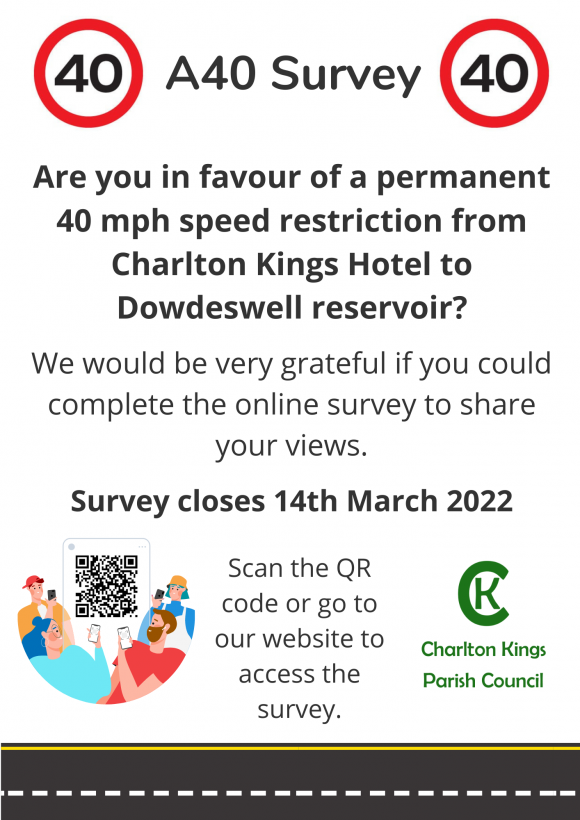