We endeavour to publicise local events and are always pleased to be contacted with details. We cannot accept any responsibilities for external information provided nor any web-links. 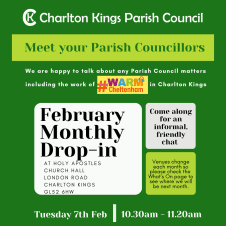 This month's drop-in is with Cllr Jan Honeywill (Chair of the Parish Council) and Cllr Lynda Johnson (CK Health and Ck Youth Lead). We hope that a day-time drop in might be helpful for residents who are unable to attend the Council Meetings in the evening or who prefer a more informal setting. Though the drop-in is loosely themed around #warmcheltenham, our Cllrs are happy to talk about anything relating to the work of the Parish Council. 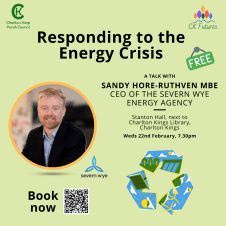 Sandy is the CEO of Severn Wye Energy Agency – one of the UK's largest charities tackling fuel poverty and Climate Change across Wales and Western England. It works to support those struggling with fuel poverty through advice and retrofitting their homes. Each year Severn Wye supports 7000 households, saving over £1.5m in energy bills. Severn Wye also invests in cutting edge technology to capture carbon and generate renewable energy saving over 20,000 tonnes of Carbon each year. Sandy has been a charity CEO since 2006 managing large charities supporting young people and disadvantaged communities across the UK.

Sandy was the Green Party Mayoral candidate in the elections in 2021 and received 44% of the vote – the largest green vote outside Brighton.

He is currently chair of Children in Need in the South West and has held a number of board positions including the Chair of Youth Action Networks and VOSCUR and has been a board member of the Quartet Community Foundation. He was founder member of the Bristol Mayor's 'One City' board where he initiated the plans to reach Net Zero by 2030 and worked with business, charities, communities, and local authorities to tackle a range of other environmental issues.

Sandy has cycled in many places across the globe including the Andes, the Tibetan Plateau, Himalayas, and central Africa. He has two adopted children who are grown up and making their way in the world.

The talk will start at 7.30pm on Wednesday 22nd February in the Stanton Hall (next to the Charlton Kings Library), Charlton Kings.