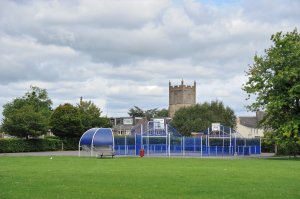 Grange Field is at the heart of Charlton Kings. Consultations with the local community over the last few years and the current crisis has highlighted the importance of such an area to people both young and old, and of all abilities. The Parish Council has listened and aims to work with the community to enhance this area and make it more attractive and multifunctional, allowing people to use it and enjoy the space at all times of the year. As you are aware the Parish Council want to work with residents now and in the future and to create a group who have a long-term interest in the Field.

Members of the public who had shown an interest in participating in future plans for the enhancement of Grange Field, plus any residents with particular concerns were invited to attend a virtual meeting on February 4th, and CKPC was very pleased with the response and interest shown by parishioners.

It was apparent that major concerns were around anti-social behaviour, litter and dog fouling. Some people were also unsure about the proposal to lay an all weather pathway around Grange Field.

We would like to reassure residents that we are working very hard to address their concerns, and the following actions are ongoing:

- the Council has ordered a contamination survey by CBC engineers to assess the safety of the ground before undertaking any works.

- as leaseholders of GF, we are contacting CBC to determine whether it is ourselves or them as landlord who is responsible for the flooding which is caused by runoff from both the MUGA and the Kings Hall roof. Suitable action will be taken as soon as possible

- We are working with our nominated Borough Council Community Support Officer to address continuing dog fouling issues. We will trial a free bag dispenser and he will patrol the field from time to time with the power to impose an immediate fine on anyone who does not 'pick up', or who is not carrying a proper receptacle ready to do so.

- the litter bins will be assessed and new or re-designed lids will be provided where appropriate. A discussion with Ubico about collection will also take place.

- since several people raised the issue of difficulties in contacting the Police to report incidents, councillors will conduct a 'trial reports' exercise to understand the problem and if necessary we will take this up with the local police force at the next opportunity.

- we feel that we need to clarify the design of the proposed all-weather exercise pathway around Grange Field, as some people had envisioned a circular 'racing track' type of installation. Many were relieved to learn that the intended plan was to link the walkway with 3 spurs to the adjoining pathways. This would provide a safe and dry crossing for pedestrians entering from all sides and form part of the current network of paths. If the working group wanted to extend the access they could add stepping stones to any planting areas provided in the future. It could also be more pleasant for dog walkers to be able to avoid the muddy grass themselves during a substantial part of the year. A clear space would be maintained in the centre of Grange Field to enable events like the Summer Fayre, and other activities to carry on as usual.

Regarding anti-social behaviour, although CKPC has limited powers to act in some situations, we can report that we have been involved in major discussions with all parties dealing with the problems surrounding the behaviour of a worrying minority of young people.

The Parish Council hosted another in our successful series of Community Support meetings on 19th January, where the relevant organisations (schools, police, churches, councillors) develop plans for supporting our young people through these difficult times and seek to reduce the incidence of antisocial behaviour. We followed this by getting together with key Borough Councillors and the other Cheltenham parishes, to try to develop a professional youth outreach service across Cheltenham. We think we have the basis to create a sustainable, long-term service based on an existing provider and more work is being done to take this forward. Your Parish Council has set aside £10,000 next year which could be used to buy in services to support our young people and address the issues that concern many residents.

We are pleased to report that since this meeting, several residents have offered to join the working group team. We look forward to working with them to help shape future plans.

For more information and future updates, see the Grange Field page on our website or contact clerk@charltonkingsparishcouncil.gov.uk

See the latest Newsletter for February 2021.

Charlton Kings Parish Council will be holding an initial virtual meeting of the new Friends of Grange Field Working Party at 6.30 pm on Thursday, 4th February 2021.

Residents are warmly invited to join the meeting to find out more about the Friends of Grange Field Working Party and consider whether they wish to become members of it. To receive an invitation to the virtual meeting, please contact the Clerk on clerk@charltonkingsparishcouncil.gov.uk

If you are unable to attend the initial meeting but would like to be involved in the Friends of Grange Field Working Party, please contact the Clerk by email or by telephone on 01242 250087 or in writing to the Parish Office at 26 Church Street, Charlton Kings, GL53 8AR

Grange Field - Litter Consultation - In response to the number of concerns that have been raised by residents in regard to litter and litter bins in the Grange Field, village centre and St. Mary's Churchyard the Parish Council's Grange Field Working Gr… bit.ly/3dQ5drB

Winter Grant Scheme - The Winter Grant Scheme, organised by Cheltenham Borough Council along with their partners, is up and running and available until 31 March 2021. It provides support to vulnerable families and adults living in Cheltenham to help the… bit.ly/37KYxaD