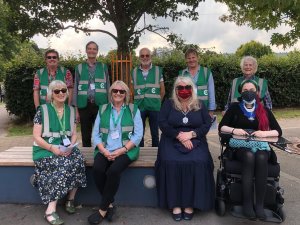 The attendance at our Autumn Fayre on Saturday 18th September was record breaking and we must thank everyone who came along to enjoy the afternoon and all of the parish councillors and staff who worked hard to make the occasion such a success. The weather was kind to us, and everything came together very well on the day.

We were pleased to welcome the Mayoress of Cheltenham, Mrs Jo Harvey, and the Mayor's Consort, Miss Jessica Diamond to perform the opening ceremony and the Mayor, Cllr Steve Harvey was able to join us later to draw the raffle and mingle with the crowd towards the end of the afternoon.

The Civic Party also met one of the mosaicists who worked on the restoration of the beautiful rill in Church Piece. Since the Mayor's Consort had been one of the village children in the class who designed the original, it was a very happy coincidence!

Stall holders filled the perimeter of Grange Field, both charitable and business and all declared a most successful result from the occasion. Some of the stalls were with us for the first time, and we already have applications filled out in advance for pitches next year.

The entertainments included Cheltenham Silver Band, music from Brian Black, a much-anticipated, breath-taking falconry display from Michael Davie Falconry, Scarrotts Funfair and children's entertainer David Lloyd. Some of the stalls were offering enticing food options from home-made cakes to candy floss and our local cafe Moosh and the Smart Fish Bar did a roaring trade, together with the pop-up bar from the Merryfellow Inn.

The Parish Council had our own gazebo, where Councillors working on CK Health Connect and CK Futures were able to engage in many absorbing conversations and listen to suggestions from members of the public. Residents were very interested in the range of work which the Council undertakes throughout the year and the Community Allotment table attracted several new volunteers! It is hoped that this produce from our own allotments feature can be expanded in future years as the Autumn Fayre seemed to be very well accepted by the public in general as a good time to celebrate together in a healthy outdoor environment.

If you would like to see more photographs please head over to our Gallery of photographs which you can find under Community in the side bar.