In 2021, Charlton Kings Parish Council was part of the partnership which secured a grant of £175,000 from the National Grid as part of their Landscape Enhancement Initiative which aims to offset the landscape intrusions of their transmission lines and pylons into protected landscapes like the Cotswolds.

The grant was for a three year project that will improve the landscape, biodiversity, archaeology, public access and enjoyment across the Cotswold Escarpment between the Devil's Chimney, Charlton Kings Common, and the electricity transmission line and pylon on Ravensgate Common.

Leckhampton Hill and Charlton Kings Common is a Site of Special Scientific Interest (SSSI), and Ravensgate Common a Gloucestershire Wildlife Trust Key Wildlife Site. Together they form a wildlife haven and a beautiful backdrop to the town. 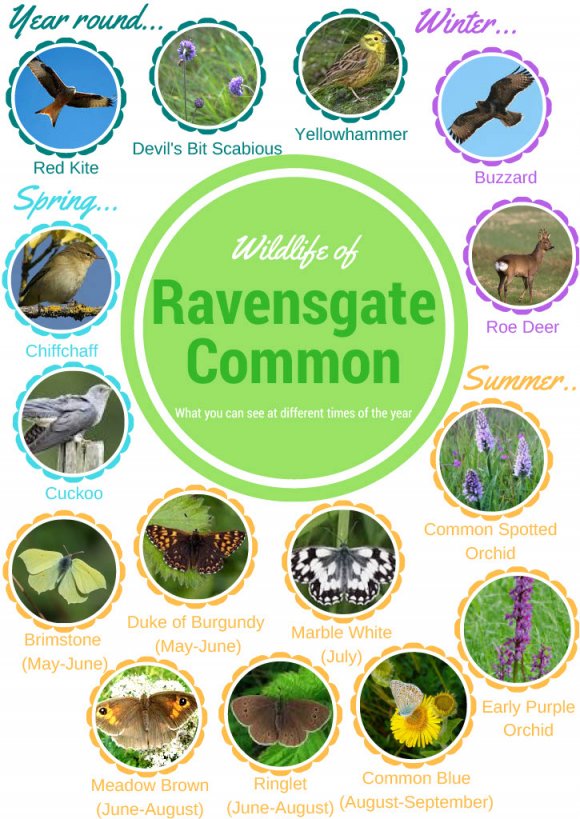 Since our November update, the Steering Group has been working with their National Grid funding partner to agree payment of the 2022 and 2023 annual grants at the start of the financial year, so that they can tender 'winter work' early in the year and secure the services of contractors who will be scrub cutting, mowing, and felling Ash trees that are shading areas of prime limestone grassland.

The Parish Council has approved expenditure to purchase a 'cattle crush' to support the new grazier's management of his English White cattle on Charlton Kings Common, and for work to install a new water supply pipe to service the cattle drinking troughs.

A major section of the Cotswold Way on Charlton Kings Common has been re-stoned to create a safe all-year surface on a badly eroded section. Questions have been asked as to why such 'un-natural' intervention is necessary, and the answer is that over 100,000 pairs of feet walking across muddy paths every year do a great deal of damage to the natural surface.

The Robomower did a great job removing tall gorse and grass 'thatch' on Ravensgate Common and has opened up one of the best views across Cheltenham.

A huge amount of work was contributed by volunteers from the Church of Jesus Christ of Latter-day Saints, who raked up and burnt much of the debris that would otherwise have stifled new wildflower growth.

We are pleased to be able to report that the first year's grant of £66,000 has been received from National Grid. Work has started from Ravensgate Common to the Devil's Chimney, on the first projects in our three-year programme of work to restore landscapes, improve biodiversity, rebuild important industrial archaeological structures and dry stone walls, and improve public access.

Walling has commenced on Leckhampton Hill, a badly eroded section of the Cotswold Way on Charlton Kings Common is being stoned, and the 'Robomower' has made great strides in removing gorse and Tor Grass thatch and scrub on Ravensgate Common.

Surveys have been made of necessary safety felling of diseased Ash trees and other tree work, and this will be carried out over the winter.

A major technological breakthrough has created the opportunity to manage grazing cattle without the need for physical fencing and some equipment has been purchased for use by the new grazier on Charlton Kings Common.

A full article will appear in a later edition of the Newsletter to describe this important innovation.

In Spring 2019, we were made aware of an opportunity to tap into the National Grid's 'Landscape Enhancement Initiative' grant fund. After many twists and turns, our partnership has finally secured a grant of £175,000 from National Grid to fund works over 3 years that will enhance the landscape and biodiversity of the limestone grassland slopes that provide the southern backdrop to Cheltenham. Including some cash and volunteer time, the project amounts to £250,000.

Cotswold National landscape (AONB) is facilitating the project, and our aims are to clear much scrub and gorse on the steepest slopes, remove dead and dying Ash trees, restore the landscape blighted by ill-advised planting of Larch trees in 1970 on Leckhampton Hill, renovate nationally important industrial archaeology associated with the quarrying of limestone underneath the Devil's Chimney, rebuild derelict dry stone walls, secure the long term grazing of grasslands and, most importantly, to improve and encourage public access to enjoy Cheltenham's best and most extensive views and wildlife. 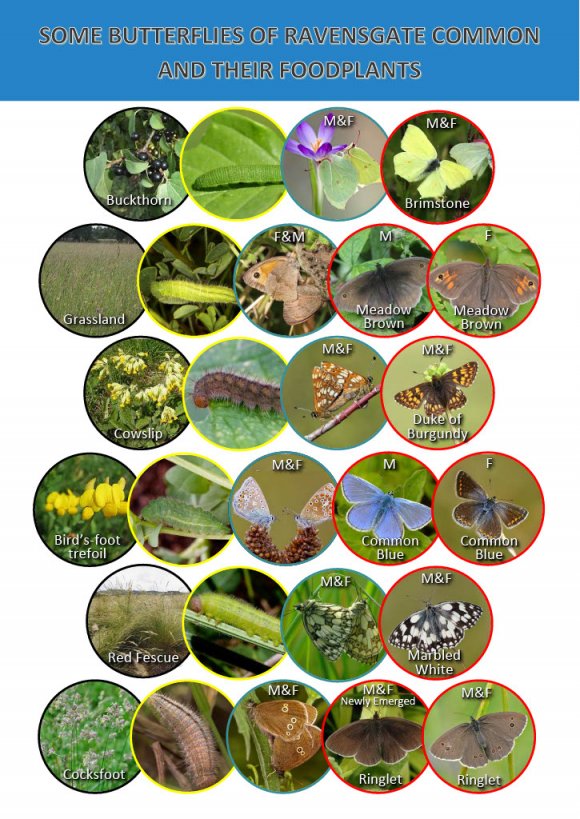 From the Devil's Chimney on Leckhampton Hill in the west, to the National Grid transmission line pylon on Ravensgate Common in the east, and with the steep slopes of Charlton Kings Common between, the limestone grasslands of the Cotswolds escarpment form a beautiful backdrop to Cheltenham's southern flank.

After the Leckhampton Riot of 1902 following the withdrawal of historical free access to the hill, and after continuous public unrest, the Hill and Charlton Kings Common was purchased by Cheltenham Borough Council in 1929. Ravensgate Common also had years of disputed ownership as a result of there being no registered title to the land until in 2009, Charlton Kings Parish Council took the role of Custodian of the Common under a Higher-Level Environmental Stewardship Scheme agreement with Natural England.

Despite the full extent of these grasslands then being under the control of two public authorities, and despite the areas all being in receipt of Environmental Stewardship payments, it has proved hard for there ever to be sufficient resources allocated to carry out necessary land management. The Borough Council's Green Space team allocates part of its Senior Ranger's time to manage work on their land and this is significantly enhanced by the co-ordinated work of volunteer work parties from the Friends of Leckhampton Hill and Charlton Kings Common(FOLK – formed in 2000 to help conserve and promote the public enjoyment of the land). There are no registered Common Rights on these Commons.

Ravensgate Common relies for its management on the goodwill of its two registered Commoners (who hold Common Rights of grazing), a small number of local residents, a local grazier whose beautiful South Devon cattle graze the common in winter, and the continuing interest and commitment of the Parish Council.

Special interests represented across the escarpment

All the land lies within the Cotswolds National Landscape (AONB) and the importance of its landscapes and panoramic views across to Wales to residents and visitors alike is recognised in the Cotswolds AONB Management Plan.

Similarly, the Plan recognises the immense biodiversity interests across the escarpment as it is all designated either , by Natural England, as a Site of Special Scientific Interest (SSSI) or by Gloucestershire Wildlife Trust as a Key Wildlife Site (KWS).

The industrial archaeology of its oolitic limestone quarries is among the best such artefacts in the country, having been in use for centuries. Most remaining quarrying features date from the period of the late 18th century to the 1920s, when quarrying ceased and include features such as the trackways and inclines, and the massive lime kilns for the production of agricultural lime. More ancient archaeology is represented by the hill fort and round barrow that are Scheduled as an Ancient Monument.

Public use and recreation

That Leckhampton residents were prepared to risk jail, and in at least five cases were tried and jailed to preserve the rights of ordinary people to enjoy the right to roam the hills, is testament to the enduring importance of these special places. Today, these rights are enshrined by public ownership, a right of access to walk or ride across Common Land, the designation of statutory footpaths and bridleways, and the creation of National Trails like the Cotswold Way that attracts 100,000+ walkers a year over our section, together with others who walk the Cheltenham Circular Trail.

The costs of maintaining landscapes, biodiversity, archaeology, and public access.

Land management of unproductive land that nevertheless needs farming management comes at a cost. Both Cheltenham Borough Council and Charlton Kings Parish Council enthusiastically contribute money, staff and councillor resources to the care and maintenance of some 100 ha of public land, but once in a while, an opportunity arises to make a step change series of management interventions to 'catch-up' on necessary management works and infrastructure repair.

In 2018, we learned of an innovative grant scheme being offered in protected landscapes by National Grid to reduce the landscape and visual impact of its existing electricity infrastructure and to enhance the quality of the affected designated landscapes. Where the visual impacts of the electricity transmission line are not able to be directly screened or otherwise mitigated, the objective will be to shift emphasis away from the transmission line by enhancing the landscape in other ways.

A partnership was quickly established and the combined knowledge, skills and enthusiasm of the Borough and Parish Councils, FOLK, and the Cotswold Conservation Board put a complex bid together in under three months. It was submitted in May 2019 and finally signed off by National Grid and, importantly, its regulator Ofgem, in April 2021.

The grant is for £175,000 over three years, with a commitment to a further three years of monitoring and restorative management as required. With cash contributions from the two Councils and an allowance for costed volunteer time, the whole project will contribute over £1/4 m to the restorative management of the most significant landscapes and biodiversity hubs in Cheltenham Borough.

In July 2021, the very first contract to be let as part of this project was for 40 tonnes of walling stone for Leckhampton Hill and further information and updates will be provided as the project progresses. 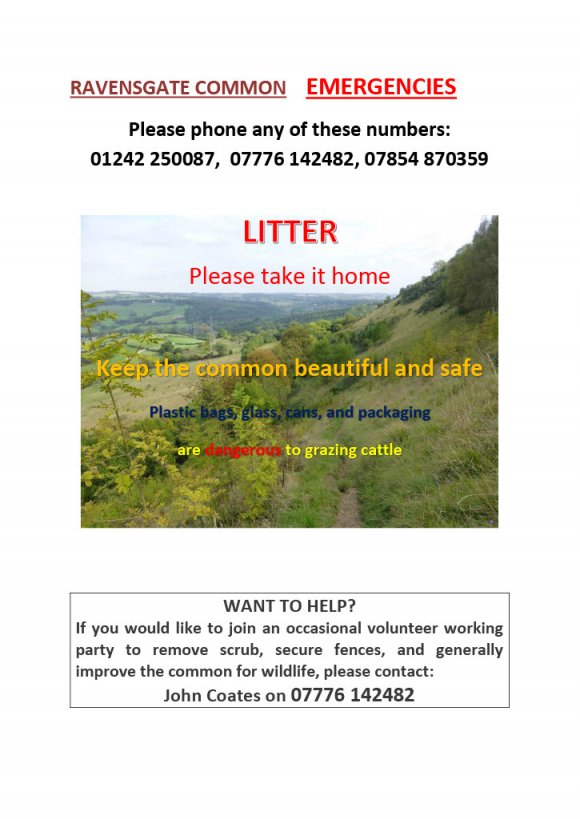 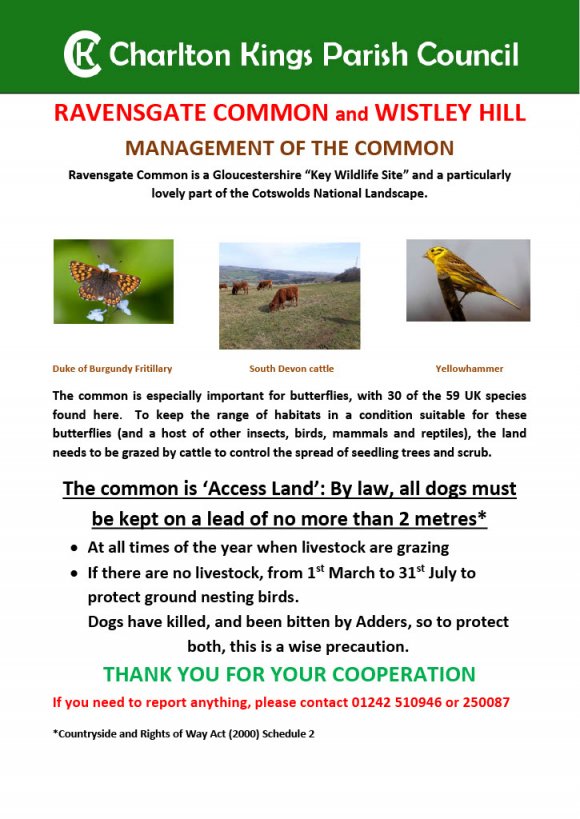 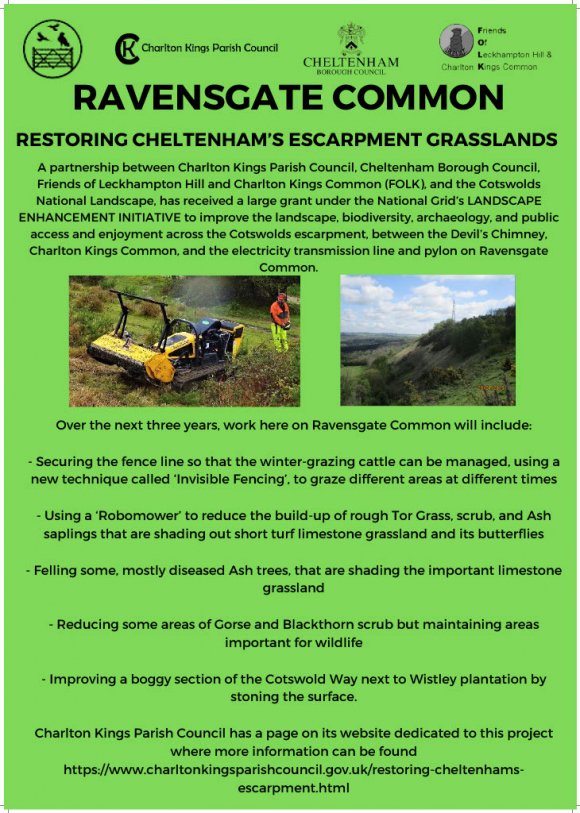